Burani bonjon as a consolation prize

I’ve got a couple of friends who play in a band together, and sometimes, when they perform, I tag along and sell t-shirts for them. It’s great fun, because I get to hang out with them and the other band members, I can see them play for free (they’re good! Check them out!), and usually I’ll manage to scrounge a couple of free beers out of it.

Last weekend I headed over to the east of the country, where they stay, for a gig. On my way there, I sent them a quick text to find out where and what time to meet. “Shall I get you guys at the venue? What time?” They responded: “Yeah, get us at the venue around 7. Next month. You know. When the gig actually is.”

I cannot even say in my defence that this is the first time I do this, that I’m not usually so absent-minded, because I actually did the exact same thing last September, when I showed up for a gig that wasn’t scheduled for another four weeks. Ah well, I got a nice dinner out of it, because they felt a little bit bad for me so they invited me over for some delicious, delicious burani bonjon. They’d actually given me the recipe for this stuff years ago, but I just never really got round to making it before. Turns out to be a total shame, because it was divine, I tell you, fuckin’ divine. So I dug up the recipe and had a go myself – mine needs a bit of fine-tuning, but it was still really good.

First of all, slice up your aubergines in fairly thick slices (or even better, slightly varying slices, anywhere between 0.5 and 1 cm). Sprinkle them with salt and put them in a colander for about half an hour.

In the meantime, finely chop the onion. Remove the seeds from the green peppers and chop them finely, too. Fry in some oil (sunflower or rapeseed, but not olive) until the onion is translucent and it starts to smell really good. Take out the mixture and keep it aside for now.

Now fry the slices of aubergine. You might have to to a few batches – just keep the fried aubergines on a plate or something and throw them back in once the last slices are done. When they are, throw back the onion and green pepper. Chop your tomatoes and add them, too. Add a little bit of coriander (but make sure to keep some for later, too!) and the kurkuma. Add a glass of water, put the lid on, and simmer the lot for half an hour or so on medium to low heat.

In the meantime, we’re going to make the yoghurty dressing. Finely chop or crush the garlic. Finely chop some fresh mint and some coriander. Put in a bowl, add the lemon juice, the yoghurt, and enough salt and pepper. Mix well.

Keep an eye on your aubergines – the sauce should come out nice and thick. Stir one last time, taste for salt, add some if you need to, then serve with the yoghurt sauce on top. Traditionally, this dish is served as a sort of pastaless lasagne: a layer of yoghurt, a layer of aubergine, and another layer of yoghurt. I like the presentation as seen in the picture so that everyone can decide for themselves on the yoghurt to aubergine ratio. You decide. Eat with bread, rice, or pitas. 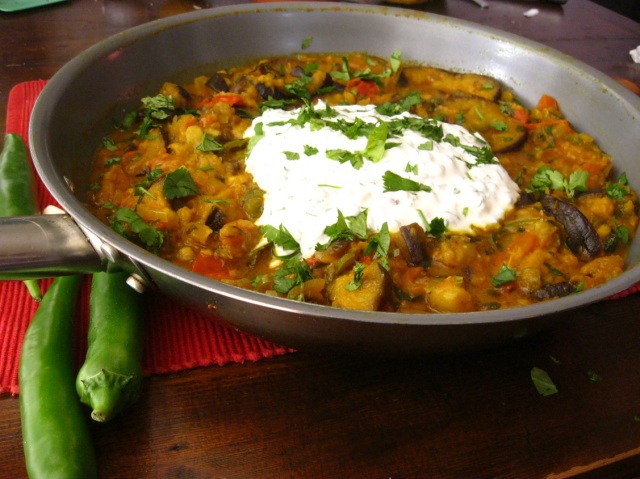 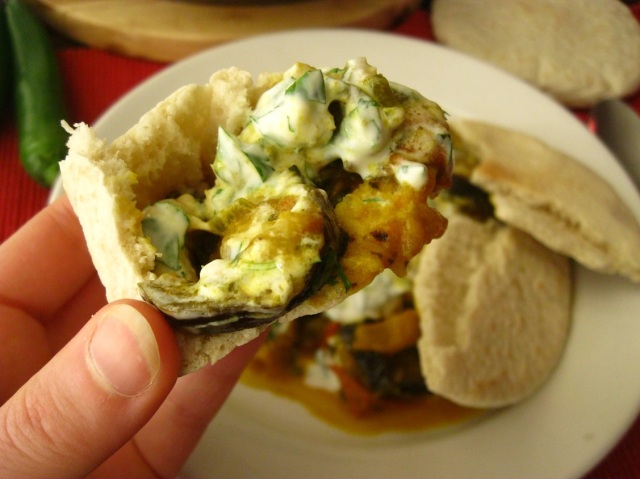 After years of being based in Glasgow, I've recently made a home for myself in Turin, Italy, for the time being, at least. This blog is my captain's log. Here I note down what I did, and what I ate. A story, then a recipe. That's how this here works. Updates on Wednesdays.
View all posts by La dittatrice →
This entry was posted in asian, Food, Vegetarian and tagged aubergines, burani bonjon, cooking, food, healthy, recipes, vegetarian. Bookmark the permalink.