The aubergine, my trusty friend in times of need

Semester one of this academic year is over, which means that I just handed in the last of my essays and I can finally take it easy for a bit. Time management is still a problem for me, and instead of working steadily over December and January, I just took off for the Christmas holidays and had to pack two months’ worth of work into January. It wasn’t pretty.

The past few weeks have consisted mostly of a lot of sighing, swearing, despairing. After the fifth day in a row of spending 12 hours in the uni library, all you want to do is get sloshed, but you know you can’t, you know you’ll be in so much trouble if you do, because the next day you’ll be worthless, and you need that day. In fact, you need every hour you can possibly use for writing. So you go home, brush your teeth, and sleep, and you do it all again the next day.

When you’re essentially living in the library, you need to get creative with your food. Writing all these essays makes you hungry, and you can’t just live off cheese sandwiches, you’re feeling crap enough as it is. The aubergine has once more shown itself to be a trusty friend in desperate times. So versatile, so delicious, so comforting. You have to invest about half an hour in grilling it, but then you’ve got yourself a companion for the following few days. Throw it in with your salad, add it to your leftover pasta to give it some extra substance, or just stuff it in a sandwich. Whatever you add it to, an aubergine makes everything better. Even a shitty month spent stressing in the library.

That’s just the grilled aubergine, if you want a delicious delicious sandwich like the one pictured above, you should also get:

Take off the green hat on the end of your aubergine. Cut the whole thing into very thin slices, lengthways. You can salt them and leave them to drain in a colander, weighted down with a wee plate and some tins of chopped tomatoes, but this will take extra time, so I didn’t do it this last time.

So when I say grill, I actually kind of mean ‘fry’. I don’t have a griddle here and the oven is too small for an enterprise like this one, so I just use a frying pan. If you have a griddle, just brush your slices with olive oil and chuck them in there. If not, put plenty of olive oil in a good frying pan, and start chucking in the slices of aubergine – flip when necessary. When a slice is nice and soft, and looking golden brown on both sides, take it out of the pan and put it on a plate to cool down for a bit. Keep going until all the slices are done. 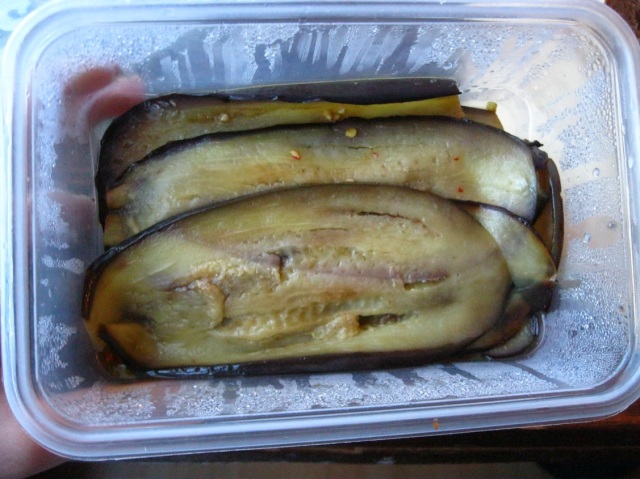 Now you grab yourself a tupperware or otherwise just a wee dish or whatever (it has to be deep-ish though!), and you put in your first layer of aubergines. Drizzle on a little bit of good, nice olive oil, sprinkle on a little freshly-ground salt (unless you salted them before, in which case they’ll be salty enough), a little bit of chili (flakes), and then layer on the next slices. Keep going until all aubergines are duly oiled, salted and spiced. Then just put them in the fridge and use them up over the week.

As for the sandwich, I trust you guys have made sandwiches before.

After years of being based in Glasgow, I've recently made a home for myself in Turin, Italy, for the time being, at least. This blog is my captain's log. Here I note down what I did, and what I ate. A story, then a recipe. That's how this here works. Updates on Wednesdays.
View all posts by La dittatrice →
This entry was posted in cooking, Food, Vegetarian and tagged aubergine, food, healthy, recipes, sandwiches. Bookmark the permalink.

6 Responses to The aubergine, my trusty friend in times of need