One of the many facts of life that most people know, but no one likes to admit: leftovers are better than fresh food. There, I said it. Leftovers are so amazing because all the flavours have had more time to settle down and mix with each other – to make friends, so to speak. Rather than being a bunch of ingredients, the dish becomes a whole. It’s magic. Italians totally know this, but they cover it up neatly by just preparing a dish a day in advance, rather than eating it straight away and hoping it won’t be finished. That way it tastes like leftovers, but it’s not.

The other reason leftovers are so great, is because you get to use them for all kinds of blasphemous creations of your own, rather than what they were actually intended for. You know, like meatballs that you slice up and stuff in your sandwich to take to work the next day. What makes it so good? Probably the fact that you know it’s wrong, you’re not meant to, it’s against the laws of, I don’t know, proper conduct or something.

My favourite illicit leftover is pasta sauce, preferably ragù alla bolognese. It’s so mincy, and salty, and tomatoey. It goes well with everything, which means your improper creations can never get too blasphemous – it’ll always work out! When I lived in Italy, I felt like ragù was somehow sacred, you couldn’t just put it in or on whatever – if you had some left, you’d just have to make more pasta the next day. But I live in the Netherlands now, I’ll do whatever I like with my leftover ragù. Like put it in a fried piadina with eggs and a bunch of other stuff for the best hangover breakfast piadina ever.

This is one of those things where I just use whatever’s in the fridge. You can do that, and use up all of your leftovers, or you can go for the ingredients I used. You decide.

Make this fried piadina – mix flour, olive oil, salt and water – eyeball the quantities to get a large ping pong ball or a small tennis ball of dough. Stir with a wooden spoon, knead, make a supple dough, and roll it out to a very thin dough pancake. Then heat up some oil and chuck in the piadina. When it starts to bubble up, flip it. Leave until both sides are golden, then put it on some kitchen roll for a few minutes while you prepare the rest. 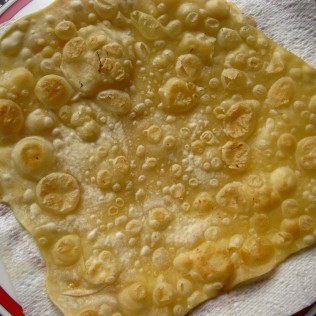 Now fry your egg, your onion and your mushrooms in the same pan. If you’re like me, you’ll want to keep the yolk intact so that the delicious yolk will spread out over all of the filling later. 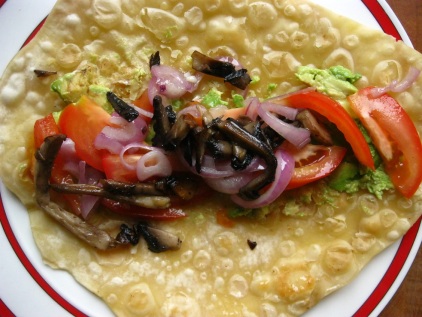 Heat up your pasta sauce in a small pot or in the microwave. Meanwhile, cut up your tomato. Spread your avocado over the piadina, add the tomato, then add all of the other vegetables, the egg, the cheese, sour cream and the pasta sauce. Now try to roll up your piadina as tightly as possible, then cut it in half. Enjoy with a cup of tea, follow up with a nap.