“Verdi, food and cooks” – the favourites of a famous composer

You know Verdi, the famous composer? The one who wrote such operas as Aida and La Traviata? Turns out he had a special predilection for food! I found out about this when I was writing my dissertation on Italian opera a couple of years ago. As a bit of comic relief between all the writing, I was reading this essay called Verdi, Food and Cooks (from Aspects of Verdi by G.W. Martin). It stated a few pretty interesting facts about the maestro.

Did you know, for example, that Verdi was a pretty good cook, as well as a composer? His speciality is said to have been risotto alla milanese. A singer from his company and Verdi’s second wife, Giuseppina Strepponi, mentions it in two separate letters, stressing how good he was at preparing it. Referring to the applause Verdi got after a performance of one of his operas, she said: “Se sapessero poi come compone il risotto alla milanese, Dio sa quali ovazioni gli pioverebbero sulle spalle!”¹ (or “If they knew how he composes risotto alla milanese, God knows what ovations would rain down on his shoulders!”).

It seems Verdi also had a fussy side – apparently he fired cook after cook, sometimes for culinary flaws, sometimes for other reasons. Once he told a young lady, the daughter of his dinner host, to quit playing the piano during dinner, as he apparently could not stand the sound of music whilst he was eating. And he ordered waiters and cooks in restaurants about, telling them what to do and how to prepare his food. After a busy morning shopping at the local market in Cremona, where Verdi lived at the time, the composer went to have  cotoletta alla milanese, calling after the waiter “Remember, plenty of butter!”³

Cotolette alla milanese is a typical dish from the North of Italy (Milan, you guessed it), essentially breaded and fried veal cutlet. “But Dittatrice, isn’t that just a Wiener schnitzel, then?” Well, it kind of is, yeah. It’s a slightly delicate subject, but one which Italians seem capable of dealing with with some degree of humour, something which you can’t normally expect from them when it comes to the authenticity of their food. Either way, if I’m not mistaken, the difference lies in the frying: Wiener schnitzels are, I believe, deep-fried, whilst cotoletta alla milanese are shallow-fried. Whatever. It’s fried breaded veal, either way. I normally fry mine in olive oil, as my use of butter inevitably subjects me to the mockery of my Italian friends, who insist I use way too much of it. However, for this occasion we’ll use butter – if Verdi liked it, how could it possibly be wrong? 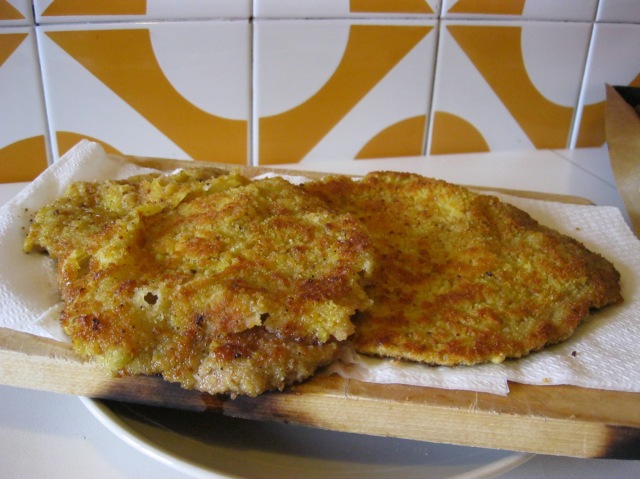 I still haven’t really understood what the correct meat for this is. I asked the butcher, he gave me coscia, or thigh (which in meat cuts translates to… God, I don’t know!), whilst various dodgy internet sources state lombo or sirloin. Yeah whatever, see what you can get your hands on. Either way, they have to be very thin slices, tenderised with one of those meat maces.

Melt your butter, and when the bubbles are disappearing, chuck in your meat. Fry on both sides until it’s a nice golden brown, then serve up immediately! Squeeze a bit of lime juice over your cutlet if you like. Compose an opera after you finish. 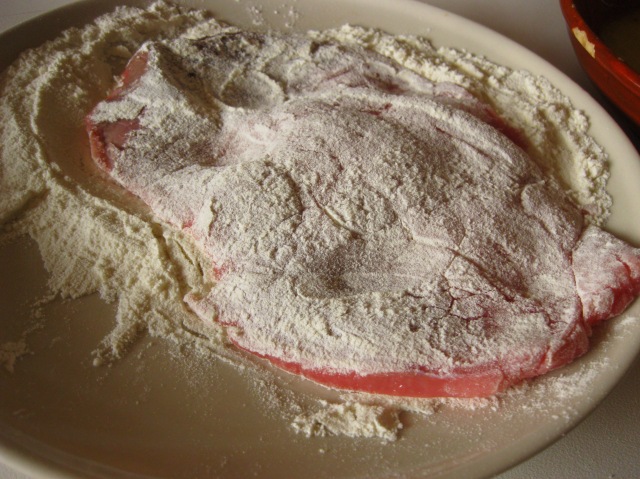 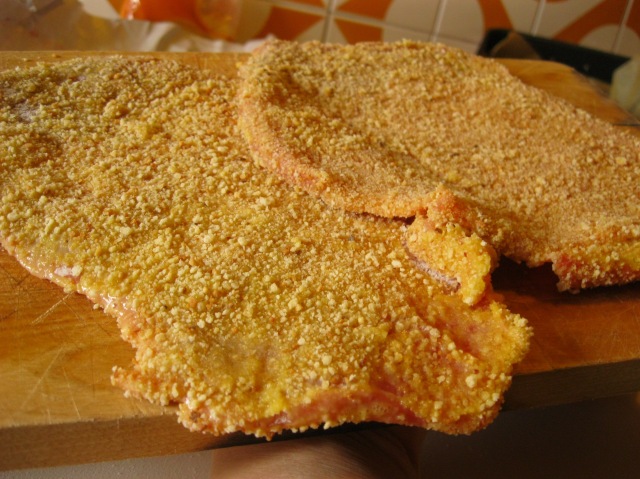 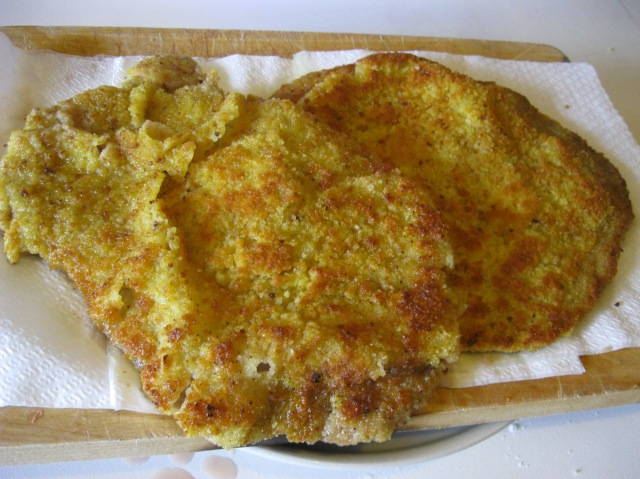 After years of being based in Glasgow, I've recently made a home for myself in Turin, Italy, for the time being, at least. This blog is my captain's log. Here I note down what I did, and what I ate. A story, then a recipe. That's how this here works. Updates on Wednesdays.
View all posts by La dittatrice →
This entry was posted in cooking, Italian, Mains, Meat, recipes and tagged cooking, cotoletta alla milanese, cutlets, food, italian, recipes, veal, verdi. Bookmark the permalink.

2 Responses to “Verdi, food and cooks” – the favourites of a famous composer