And the Lord spoketh, “go forth, and copulate with thouself, for my wrath is upon thee”

Isaiah 24:3 And the lord saith, “Let there be a deluge, and let my aqueous fury pour down unto Turin, and let it smite the Turinese, for they have roused my anger.

Isaiah 24:4 And the lord senteth down his liquid anger onto the people of Turin, and they cried, “Behold, this summer is surely a ruin, for we have kindled the wrath of the lord.”

Isaiah 24:5 And the Lord sent forth his legion of mosquitoes unto those who dwelt in Turin, for they had roused his anger, and the lord saith

Isaiah 24:6 “Let the people of Turin suffer my wrath, for they are sinners, and they have not obeyed my laws.” And it came to pass. And the Turinese were much aggravated.

Or, in the King James translation:

“And the Lord saith: Fuck the people of Turin, because they are cunts. I shall do everything that is in my almighty power to ruin their summer and they can just sit in the rain, scratching their mosquito bites all summer, thinking about what they did. Because fuck them and their puny mortal lives, see if I give a shit lol kthxbye.”

And that, dear people, is why I feel incredibly scammed just now. I came all the way from fucking Glasgow to avoid exactly this type of bullshit, and here I am, moping around the house whilst it’s pouring it down outside pretty much All. Goddamn. Summer. I am not impressed. Even when the morning looks sunny, you just know that it’ll rain by day’s end. What’s sun worth if you’re only waiting for the inevitable rain? Even if you’re not going to wear it right away, you still have to carry your stupid jacket around all day, anyway.

However, life goes on and by now, we’re sort of used to it I guess. I’ve got a holiday to a sunnier country planned later this summer, so that thought keeps me going. In the meantime, I try to keep my spirits up with summery food. If I can’t get sunshine, I’ll try at least to get something bright and radiant in my belly. Like ginger and carrot soup. Because to me, ginger is a really energetic flavour, if that makes sense. If sunshine had a flavour I imagine it’d be somewhat like ginger. So if you’re stuck in the rain, like me, and you need something to perk you up, have a try at this. You’ll feel better afterwards.

For two or three, you will need:

First, prepare your veg stock if you need to.

Chop up your onion, your dried chilli and crush your garlic. Put all of it in a pot together with a little bit of oil and fry on low heat. Then, peel all of your carrots and slice them into medium sized chunks. Peel your potato and make small chunks. Peel your ginger and cut it lengthways, making thin slices. Chuck those into the pot with the rest of the stuff, then add some vegetable stock – not all of it, but enough to cover most of the vegetables. Bring to the boil, lower the heat and just let it simmer for about half an hour or so. Check if your carrots are completely soft by trying to crush a piece with a fork. If it crushes OK, you can start making a soup out of this thing.

Have a little taste of the liquid. It’ll probably be pretty gingery already. That’s why we’re going to fish out the ginger now. Ginger doesn’t blend well and you’ll be stuck with little chunks which aren’t actually that good, so the ginger is kind of like a tea bag in this recipe – you let is soak out its flavours and then you remove it. After you’ve removed the ginger, stick a hand blender in the soup and buzz that motherfucker up. Keep going  until you’ve got a smooth liquid.

Now you need to add some yoghurt, because the soup will probably be quite sharp what with all the ginger. Add about half a cup, taste to see if you like it and add more if you want to. Serve your soup topped with a little bit of parsley or coriander. 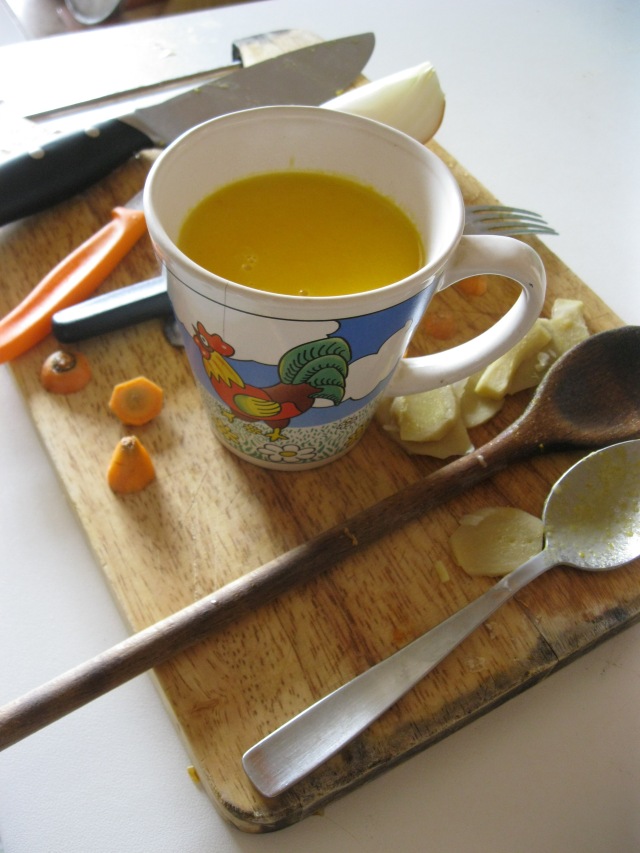 3 Responses to And the Lord spoketh, “go forth, and copulate with thouself, for my wrath is upon thee”