When you go to any random town in Italy, there’s a good chance you’ll stumble upon a random antiques market at some point. At these antique markets, much like at all antique markets in the world, you will find many things that are in fact not antique at all, but of fairly recent production. You will also find things that, although age-wise they might be deemed ‘antique’, aren’t in fact antiques because apparently those are two quite different things. You will also find some disturbing shit, but never mind that.

A while ago I was in Vercelli with some buddies, and who’d have thought it, we came across an antique market there! For some reason it is simply impossible not to have a browse whenever you find one, so we went and had a little look. We even made some impulsive and unnecessary purchases. Some funky teaspoons for “a friend who collects them”. Some old Donald Duck comics, ‘to read on the train back home’. And then there was the gnocchi board.

My friend saw it first. I saw it only about half a second later, but that half second was enough for him to start moving towards it. You know that moment where you see something happening, like in slow motion, and you know there is no stopping it, all the processes have been set in motion, you’re slowly but surely headed towards disaster? That’s what happened there.

My friend only had to take a couple of leisurely strides towards the table with the gnocchi board before he was close enough to pick it up. “Ah look, this is so handy, I wonder how much it costs!” he said. The lady who was selling told us it was only two euros, a bargain. I tried to discourage him from the purchase: “I wouldn’t buy that if I were you…”. But my devious grin gave me away. “I’m on to you!” he squealed triumphantly, “you want it for yourself, don’t you?!”. I could only admit guilt and hang my head in shame.

But later that afternoon something fortunate happened. See, one of the other people in our company bought me an ice cream, and in a contest to prove which of the two was the most chivalrous, I was given the gnocchi board on the spot. Just like that. I was touched and delighted. People can be so lovely sometimes.

Now, maybe you’ve been reading this story, and you’re just thinking “That’s all fine, Dittatrice, but what on earth is a gnocchi board?” I’ll show you. It’s one of these bad boys:

They make for fantastic spanking paddles, undoubtedly, but in general you use them for making the characteristic stripy pattern on your gnocchi, which enables the delicious sauce that you serve your gnocchi with to attach itself in much greater quantities!

There’s already a gnocchi recipe on this blog, so we’re going above and beyond today. Gnocchi agli spinacci, or spinach gnocchi, with red wine and tomato sauce. 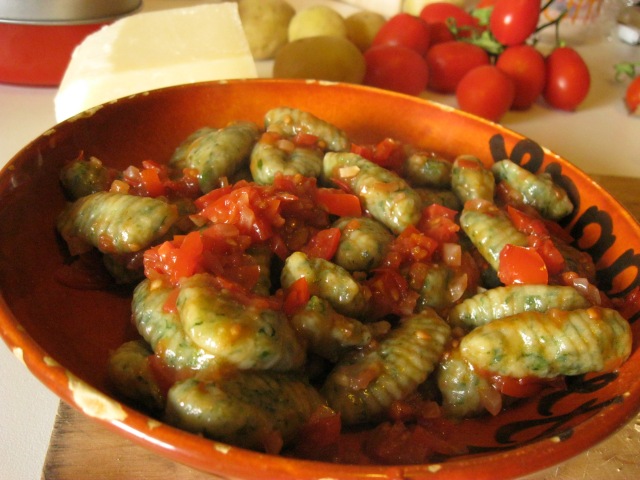 On a side note, have you always wondered how to pronounce gnocchi? Have you always been calling them k-no-chee? Well stop right there, good citizen, for henceforth you shall know them by the name of Nyoh-kee. It looks more Thai that way but believe me, it’s more Italian.

So, for a massive pile of gnocchi that you will probably regret making afterwards unless you’ve got at least 4 people over for dinner, use:

Start by making the gnocchi as this is somewhat a time-consuming task (although not as time-consuming as it used to be before I had my gnocchi board!).

Take your spinach out of the freezer so it starts defrosting. You’ll need it later. Boil your potatoes in the skin until they are done, which will take about 20-30 minutes, depending on size. You can test if they are done by sticking a fork inside them, all the way to the middle, and seeing if it falls off easily. If yes: done! If no: keep ’em boiling.

Once they’re done, rinse them with cold water, pick them up with a fork to avoid scalding your hands (or leave them to cool for a while, but that means this becomes even more time-consuming) and peel off all of the skin. Pop them in a bowl and mash them up with a potato masher.

In the meantime you’ve defrosted your spinach. Good. Put it in a sieve and squeeze out as much liquid as you can. Then chop it up as finely as you can. Use a hand blender or scissors if you prefer, but you want it to be very fine. Add it to the mashed potatoes. Now add the flour, too. Knead the mixture with your hands until it’s a smooth ball. If it’s too sticky, add flour. You’ll need quite a bit, probably, because of the added liquid from the spinach. Don’t bee afraid to add some more if you feel the dough could use it. 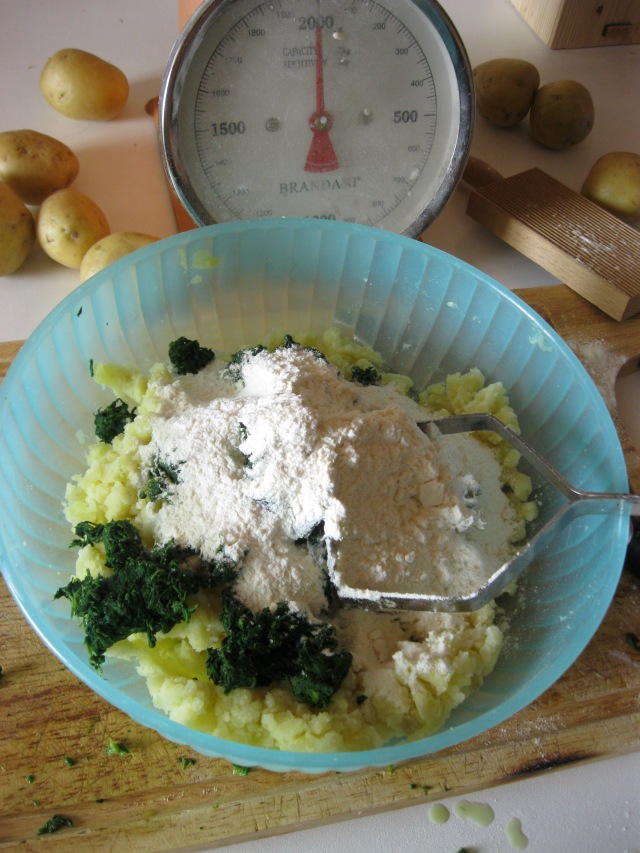 Now divide the dough into several smaller, more easily rollable quantities, and roll those out into gnocchi snakes, like so.

Cut off appropriate, gnocchi-sized chunks and cover hem with some more flour, maybe. You’ll thank me later when your gnocchi aren’t sticking together like a sticky ball of death. Now you can start using your exciting new gnocchi board, or, if you don’t have a gnocchi board, a stupid old fork.

Now it’s time to make your sauce. Chop up your onion and basil, gently fry  in some olive oil. Add the tomatoes, chopped up into small chunks. Leave to fry for a couple of minutes, then add the wine! Wait until it’s evaporated more or less, taste, add sugar and salt if you need to, and leave to simmer on low heat.

Boil your gnocchi. Once they start floating, they’re done, so stand by with a skimmer or something similar and fish them out as soon as they appear at the surface. Now chuck them in with your sauce, mix well and if you fancy it, serve with some grated parmesan or some extra basil.

1 Response to Interesting finds at the local antique market