My life with my new flatmates, part VI: yoghurt

Everyone has their quirks, and here in the flat, the three of us are no different. Specifically, we all have products that we must have in the house at all times, or we freak out. My product is eggs. What if I suddenly want to make a cake or something? If there are fewer than 4 eggs, I’ll buy a new box. I just have to have some, no compromises.

My flatmate the Queen never fails to have a bag of frozen spinach in the freezer. It’s one of her go-to hangover cures, and in all fairness, she is the Queen of the Nights Out, so it’s a fair enough desire to have a hangover cure at the ready at all times. You never know when you might end up partying and needing a small boost of iron the next day.

Blenderman has got a few fixations of his own, one of them being yoghurt. I’m used to Italians eating super sweet, coloured, fruit yoghurts, but he eats the actual, non-sweetened real deal, which is great. I’m a Northerner and as such quite a yoghurt muncher myself, and even the Queen is quite fond of it (especially in Health Weeks), so we all tend to buy it quite often. Blenderman is the undisputed yoghurt champion of the flat, though.

The other day he suddenly looked a bit despondent, and staring at his yoghurt, he sighed: “It’s just not the same… the yoghurt at Carrefour used to be so much creamier.” I was suspicious at first, so I suggested it probably used to be sweeter, not creamier, but he was adamant. And when one of my flatmates, or friends, or loved ones, in short, when someone I’m fond of complains that their yoghurt isn’t creamy enough, then so help me God, I will make them creamy yoghurt, dammit.

Here’s a Dutch recipe for you. It’s called hangop, which refers to the process of making it: you basically hang a bunch of yoghurt in a cloth or tea towel, making it the creamiest yoghurt you’ve ever had, even thicker and creamier than Greek yoghurt. It’s barely any work, but it’s well impressive. Have a shot. Then have it with some strawberries, muesli, honey or all of the above. 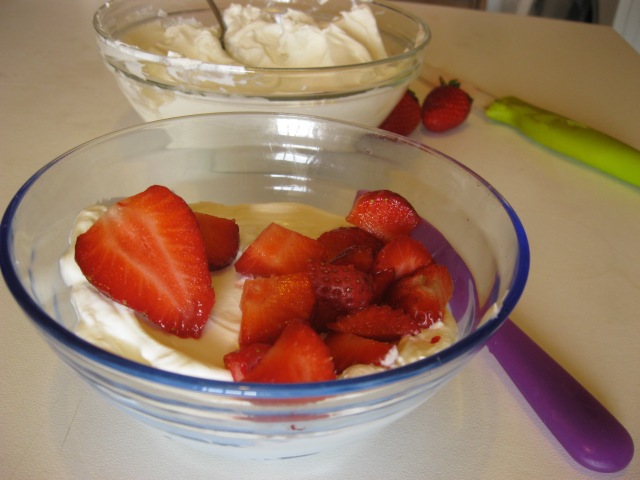 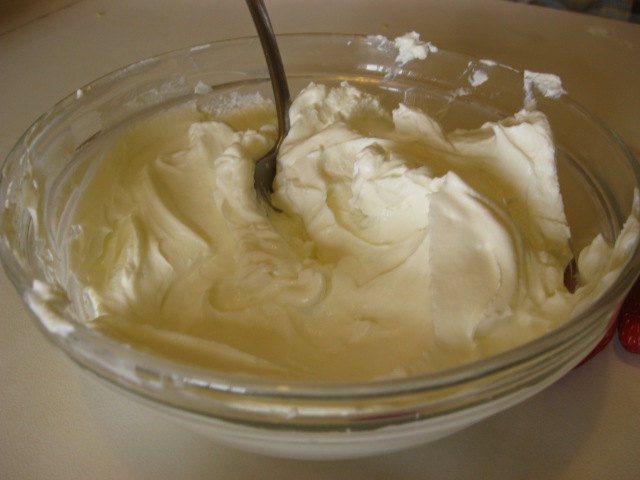 To make it worth my while, I tend to make 1,5 litres at a time. Quantities are up to you. Mind, ion any case, that although you are left with significantly less yoghurt in volume, the filling capacity remains more or less the same. So for a bunch of hangop, use:

Rinse your tea towel very well, then wring it out so that it’s only damp, not dripping. Put the tea towel in a sieve or colander (obviously one that’s large enough to hold all of your yoghurt), which you then place over the bowl. The yoghurt should hang over the bowl, so that there is enough space for all of the liquid to come out without touching the bottom of the colander. Tuck the tea towel in so that the corners are in the bowl: as the yoghurt is filtered, the tea towel soaks up some of the liquid and it could start dripping, getting your fridge all dirty.

No, once you have this set up complete, tip in all of the yoghurt. That’s all you need to do. Just pour it into the towel and leave it alone for at lest 3 hours. Of course the longer you leave it, the thicker and creamier it will be. You can leave it over night if you want to, just make sure it’s no less than three hours.

Once you’ve left it to filter for a few hours, the yoghurt will be super thick and no longer liquid. When you look closely, you’ll see it has the pattern of the tea towel, it’s that thick! It’s delicious and creamy and you can serve it with whatever you like. It keeps in the fridge as long as normal yoghurt, so there’s no need to finish it all in one go. 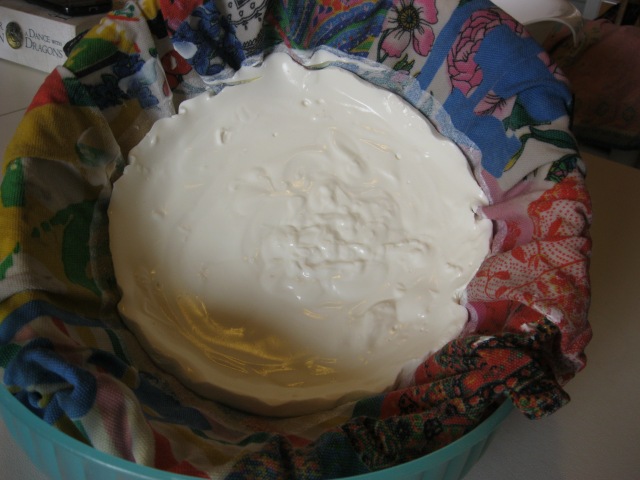 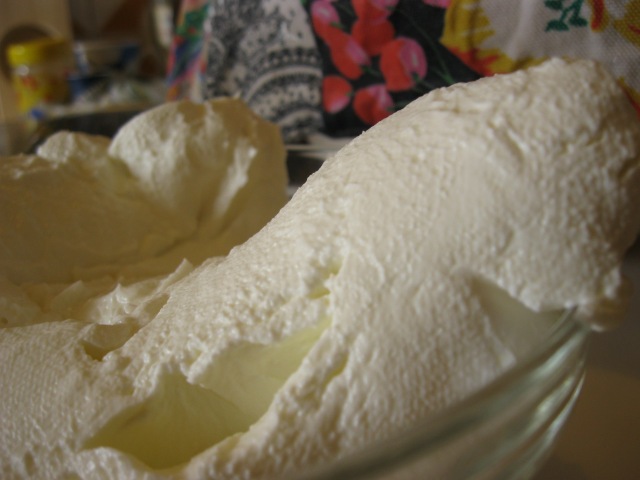