The first picnic of the year

A while ago a colleague of mine discovered the ol’ blog here, and rather than discreetly reading it and keeping that information to himself, as most of my readers appear to do, told everyone he knew about it. This means that by now, half of the people I work with have started reading what I post here. I have to say I’m actually quite excited about this. My reader count is sort of pathetic, but my colleagues have probably doubled it, and it’s nice to know that people are sort of interested. On the downside, I have to be careful with what I write now, but never mind that.

When Wednesday comes around, I’ll be asked what will be on the blog this week. Or sometimes, on Thursdays, the comments will start rolling in. “So, Dittatrice, you really do like your butter, don’t you?” “Who’s this Blenderman?” Or, if something goes wrong, I’ll get a mild scolding. Not often, but just every now and then, I’ll get a wee comment. Like last week, when someone enquired what was on the blog and I said it was polenta concia.

Yeah, fair point, that. Polenta concia is actually a bit wintery, and I was going to put it on the blog ages ago, but it never really happened. Last week was sort of pushing it, because spring has descended on Turin with its warm airy wings. It’s not really time for winter food anymore.

In fact, last weekend I had my first picnic! By which I mean that I sat in the park and I ate there, rather than in my kitchen. It wasn’t a very impressive picnic, I’ll admit, but there was some home-made food and a bottle of wine and some Asian youngsters playing badminton right next to me, which is really all you need for a successful picnic.

For the picnic I made some piadine filled with courgette and lemony ricotta. My Italian friend (the only one who turned up and as such the only person deserving of my delicious home-cooked picnic wares) found it a bit strange and unnerving, I think because Italians associate the taste of ricotta and lemon with sweets rather than with savoury things. This is why you should make sure to exaggerate with the salt and pepper, that way there can be no doubt that this is savoury business.

For 4 wraps, which you can then chop in half to make small snacks for max 8 people:

With the heel of your hand, crush the garlic so that it’s sort of open, but still in one piece. Slice some long strips of zest off the lemon. Slice the courgettes as you wish or as you can see in the picture below. Heat some olive oil in a pan, chuck in the garlic, lemon and courgette and fry on medium heat. Exaggerate with salt and especially pepper.

Meanwhile, mix the ricotta with about 2 tbsp of lemon juice and the same quantity of olive oil. Add some salt to taste, then spread the mixture on the piadine.

Once the courgettes are cooked, remove the lemon zest strips and the garlic and chuck them out. Now divide the courgettes over the four piadine, roll them up tightly, slice them in half (if you wish), stick them in a tupperware and go out to enjoy them in the park. 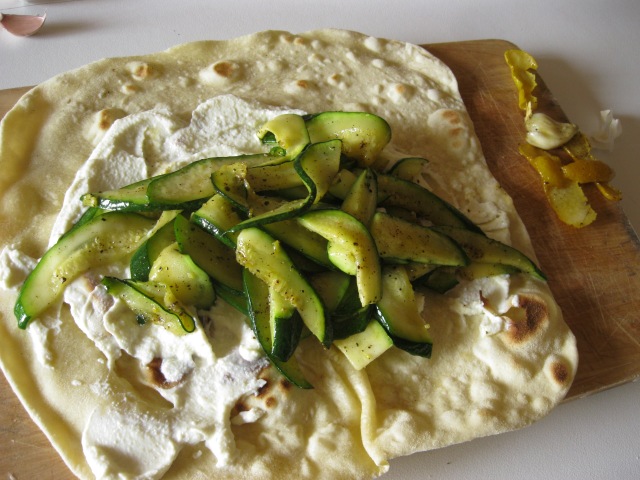 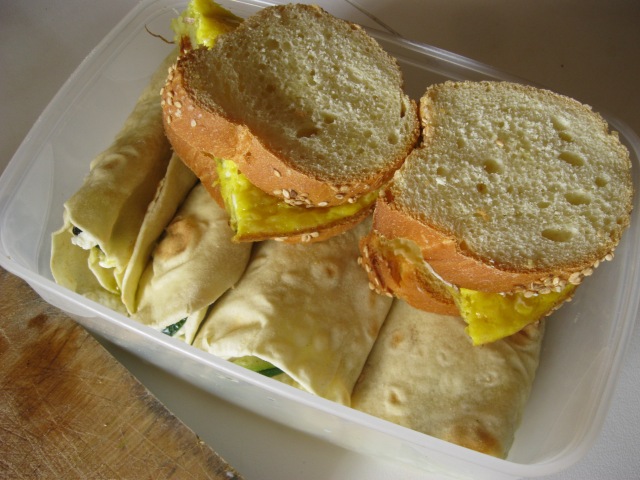 1 Response to The first picnic of the year