The only thing to fear is fear itself. That and butterflies.

For a fierce and fearsome dictatress, I really do have an awful lot of irrational fears. For instance, every time I’m on a plane and we take off, I’m a whisker away from losing it completely. If, in summer, a butterfly gets too close, I’ll run and scream until it leaves. Since almost burning my parents’ house down a few years ago, I always check it’s not me that’s on fire whenever I smell smoke. The mere mention of Slenderman makes me nervous.

Last week I managed to overcome two of my more absurd fears in one go: 1) I made gnocchi 2) for my flatmate.

The terror of cooking for Italians is abating quicker than anticipated, mostly because I’ve gotten used to my flatmates and the novelty has worn off, partly because I’ve realised they will eat almost anything without batting an eye. They’re really very laid-back and open to most things (although I haven’t introduced haggis to the flat yet, so who knows, I might yet be able to freak them out).

Then there’s my unease with all things dough. I just don’t like dough. It never has the right consistency, it’s always too sticky, and when you’re by yourself you can’t even add more dough because your hands are always covered in an inch-thick layer of sticky horribleness, so you can’t touch anything without leaving it completely dirty and nasty. If you stick to the recipe, it barely ever comes out the way it should. So I decided ‘sod the recipe’, and added flour to my potato dough until it became a smooth, kneadable ball of awesome – or rather, had my flatmate and his clean hands help out with adding flour. The gnocchi were really nice in the end, even my flatmate said so. See? Nothing to panic about. Everything’s fine.

We made double portions so we could freeze half and then ate everything in one go, anyway. This probably means these quantities are OK for anything from 2 to 4 people, as a starter.

First, boil the potatoes. Leave them in their skin, boil them until cooked all the way through (check with a long-pronged fork: if the potato stays on the fork, it still needs cooking – if it slips off easily, it’s cooked), then rinse them with cold water and peel the skins off. (Trick: stab the potato with a fork and hold that rather than the potato itself to avoid burning your fingers.) Now mash them up, and add the egg, the generous pinch of salt and flour to the still warm mash. Start with 150gr, then add more later until you get a dough that’s kneadable and not sticky.

Knead and knead until you’re happy with your dough, then take a portion of the dough and roll it out on a well floured surface to make a long dough snake about 2 cm thick. Now cut the gnocchi off – you want chunks of probably about 1 cm wide, but see for yourself what size you like them.

Now use a fork to make the funky gnocchi pattern: roll each gnocco over the prongs of the fork (rolling them over the back with 4 fingers is easiest in my experience). I thought this was completely unnecessary at first, but my flatmate pointed out that the sauce will stick better to a ribbed surface – an excellent observation, and enough reason for the extra hassle.

Put the ribbed gnocchi on a floured plate, and when they’re all done, cook them in boiling water with plenty of salt. The gnocchi are done when they come floating to the surface, and they won’t all be ready at the same time, so be ready with a skimmer to take them out of the water as they come to the surface, leaving the ones on the bottom to boil as long as they need to.

Serve with whatever you like, or as I did, with pancetta, butter and sage. 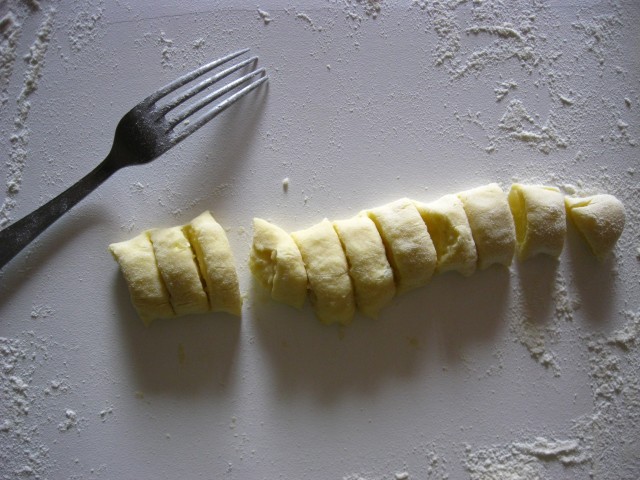 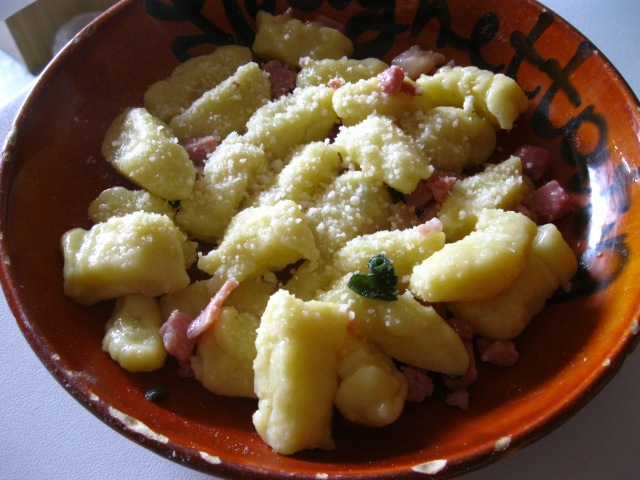 4 Responses to The only thing to fear is fear itself. That and butterflies.