Guess what! I’ve been invited to a dinner club. As in, a bunch of people who get together more or less regularly and then eat things that they’ve made. This is new to me. I’m not really that much of a social animal so I’ve never joined in any such group cooking and eating. I used to have something with a couple of mates that we called a dinner club, but that was really just me cooking them dinner most of the time. Which was great. Best dinner club ever. We called ourselves The Hungry Wolves for sundry reasons, the most prominent that we’re losers.

But now I’ve been invited to an actual dinner club, and there’s going to be many ladies that I imagine will be very sparkling and social and I’m pretty sure they’ll all come out with really nice food and I’m very keen to impress, seeing that it’s my first time and I only know one of the attendees. I’ve mulled it over for a while and by process of elimination, I think I’ve come up with a pretty good idea.

See, it’s an Italian themed night, which is lucky – I’m pretty comfortable with the Italian kitchen. However, it’s a potluck style night, so it has to be something you can take with you, that doesn’t require further preparation upon arrival, and that doesn’t have to be super fresh – that means pasta and risotto are out of the question. I contemplated a big massive pot of minestrone, but figured that would be hard to take with me on public transport. However, this potluck isn’t going to be one attended by students only (in fact, I might be the only undergraduate there), so there isn’t going to be an overwhelming amount of sweeties. I decided I’d make a dessert.

Lemon ricotta pistacchio cake, here we go. If you don’t have pistacchio spread and your supermarket doesn’t stock it (which is likely), you can get it at the Italian delicatessen, online, or if you insist, you can make it yourself. I got mine in Italy a while ago but I’ve not actually used it so far – time to change that.

For a 22 cm diameter cake, you will need:

Beat the eggs with the sugar, then add the pinch of salt and liquid butter, then the ricotta, the lemon zest and finally the flour. Mix well and loosen up with some milk until you get the right consistency – it shouldn’t be runny, but it should be easy enough to stir.

Grease a 22cm round cake tin and pour the mixture in. Pop it in the oven for about half an hour, then check the colour (should be golden brownish) and check with a knife or skewer if it’s cooked all the way through. If yes, take it out and cool. This will take a couple of hours, but you really want it to be completely cool when you put the icing on.

So, to make the icing, you make sure your butter is completely soft (but definitely not liquid) and put it in the bowl along with the cream cheese, ricotta and sugar. Beat with an electric mixer until completely homogeneous. Then add the pistachio spread. The mixture will get a nice light-greenish colour.

Apply to the cake, then cover with some whole and some chopped pistachios for decoration and finish the beast off with some more lemon zest. 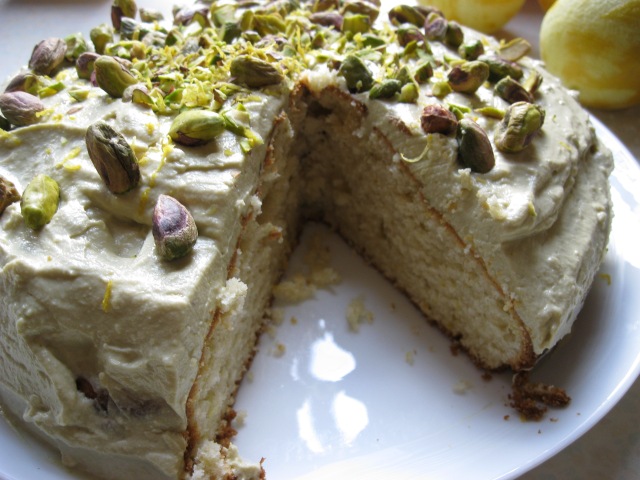 After years of being based in Glasgow, I've recently made a home for myself in Turin, Italy, for the time being, at least. This blog is my captain's log. Here I note down what I did, and what I ate. A story, then a recipe. That's how this here works. Updates on Wednesdays.
View all posts by La dittatrice →
This entry was posted in Baking, Food, Italian, Vegetarian and tagged cake, dinner club, dinner party, lemon, pistachio, recipe, ricotta. Bookmark the permalink.