In my first year of uni, my previously-mentioned friend C had never cooked a meal in her life. She could bake all sorts of things, but cakes don’t count as a meal. The concept of vegetables was somewhat confusing to her, as she didn’t usually eat them. At all. So when she realised I could cook a meal out of pretty much anything, she was intrigued. She decided to play a game of Ready, Steady: Cook with me. Without me knowing this, by the way.

She’d show up to my house out of the blue with a big bag of random vegetables. With her big brown doe eyes she’d coerce me into into the shared kitchen in the student halls I used to live in (which was invariably a tip) and she’d just watch what happened. Sometimes it resulted in a soup, sometimes a stir fry, and sometimes in something totally unexpected.

Now that we’re 5 years further she has learned how to cook and she’s actually gotten really good at it. Sweet and sour tofu is no biggie to her, her burritos are amongst the best I’ve ever had and she makes a damn fine leek and tattie soup.

However, there’s still one vegetable that she hasn’t mastered: the aubergine. She just can’t seem to get comfortable with it. Admittedly, it’s a tricky one, and I tend to be really picky about it – in my opinion, not many people can cook an aubergine properly. I can, though! Yes sir, can do and proud of it. So that’s the one thing she still brings over to my house, hoping that I’ll cook her something with it. And so I do.

Yesterday we had pasta alla norma. It’s a Sicilian dish that’s very easy to make, requires few ingredients and is super delicious. It’s not all that expensive and it fills you up pretty quickly, being full of tasty ricotta. I think the traditional way is to have it with spaghetti, but C’s favourite pasta are fusilli, so we had those. 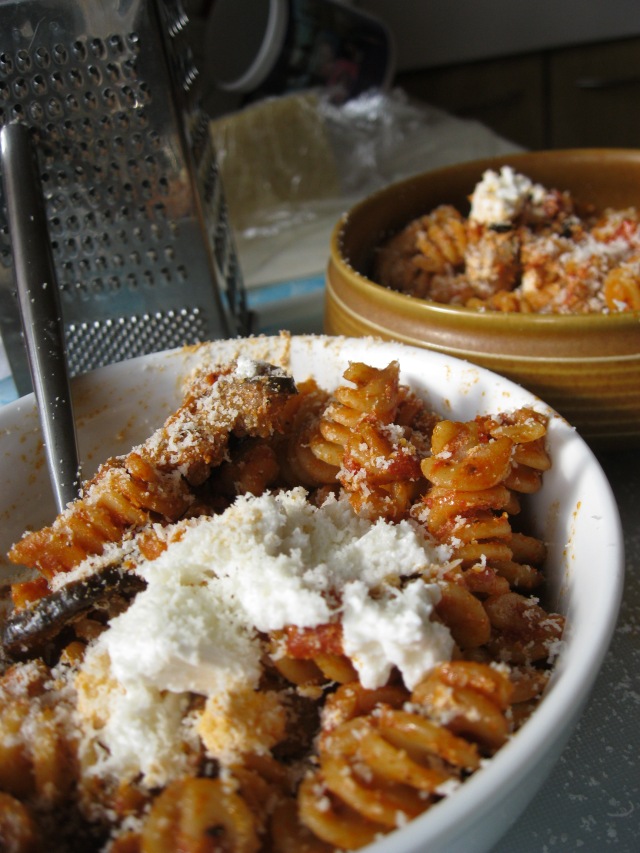 Slice up your aubergine into thin discs, sprinkle them with a generous amount of salt, put them in a sieve or colander with something heavy on top and leave them for at least half an hour. Then dry them with a clean tea towel or some kitchen tissue. Fry them in enough olive oil. You won’t be able to fry them all at once – do it in batches and let each batch sit on a plate with some paper tissue to soak up the excess oil.

Whilst the aubergines are draining, make the tomato sauce. Fry the cloves of garlic in largeish chunks in some oil along with the optional dried chilli, then add the chopped tomatoes. Add the herbs, salt and pepper to your own judgement, and some sugar if the tomatoes are on the sour side. Leave to simmer with the lid on. Taste for salt and pepper.

Boil the pasta so that it’ll be ready at more or less the same time as the sauce.

Now it’s time to combine all the things. Throw the fried aubergine slices in with the tomato sauce, and add the ricotta. Mix well. Add the pasta, stir well, then serve up and top with some parmesan. 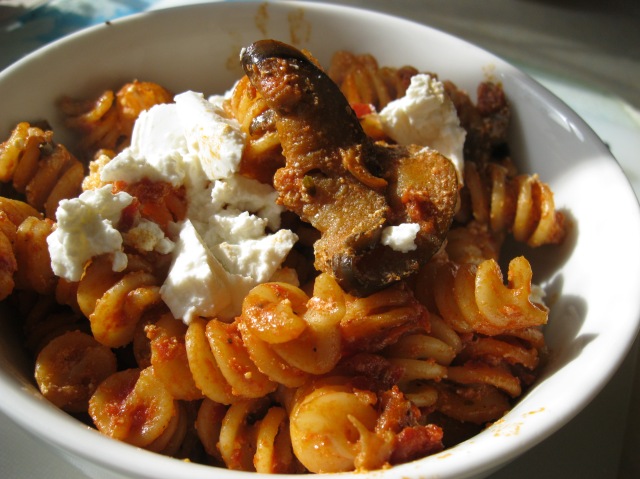 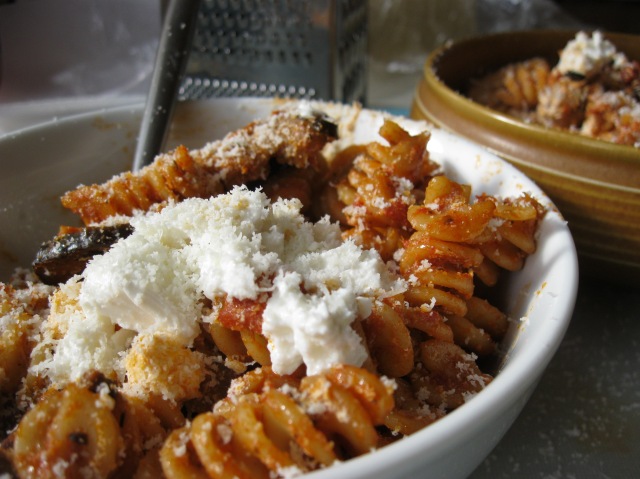 3 Responses to Ready, steady, cook my friend some aubergine