Crying, with the lights off, whilst eating nothing but stale bread and pickled gherkins for a couple of weeks.

No, it’s not quite as bad as that. A certain brand of Irish airlines does help with their unchristian-early-but-cheap-as-fuck flights. I tend to stay over with people I know rather than in hostels, so I save a lot on that. Plus, my landlady is nice enough to give me a discount on the rent if I’m not in the flat for more than 2 weeks a month. So all in all, I manage to get away fairly cheaply.

However, money has been a bit tight after all this travelling about, and although I’m not complaining – I’d gladly give up many things in order to travel – I did have to come up with something to avoid getting into overdraft, whilst still not going hungry.

Thankfully, like the Irish I am very fond of potatoes, and I always have a few of them lying about the kitchen. Combined with some other things that you just always seem have in the house, I managed to make a pretty good mustard tattie soup that was very filling, very cheap and very good. All I used was store-cupboard stuff, some milk (which my flatmate always has in the fridge and doesn’t mind sharing), a lone sausage I had left from last week’s coddle, and I splashed out with some spring onion which, at 70p a bunch, I could just about manage.

For two, or for one deeply impoverished person who doesn’t mind having the same thing twice:

Stick the sausages under the grill and keep an eye on them so they don’t burn. Roll over occasionally.

Chop up 3 of the spring onions, put them in a saucepan with some butter and gently fry them for a while. Meanwhile, boil water (in the kettle) and peel the potatoes and cut them into small-ish chunks. Add them to the pot with the onion, along with enough water to cover all of the potatoes and a bit of salt. Leave to boil for quite a bit. Once they’re soft, mash everything with a hand blender. The potatoes will make the soup very thick – add a bit of milk to dilute it further and if you still don’t like the consistency, add a bit more water or stock. It should be pretty thick though. Add the mustard to taste, and salt and pepper.

Once the sausages are cooked all the way through, take them out from under the grill, leave to cool for a little (if the soup isn’t ready yet, at least) and slice them up. Stir through the soup or serve on top of each individual bowl to look nice, along with the last two of the spring onions. 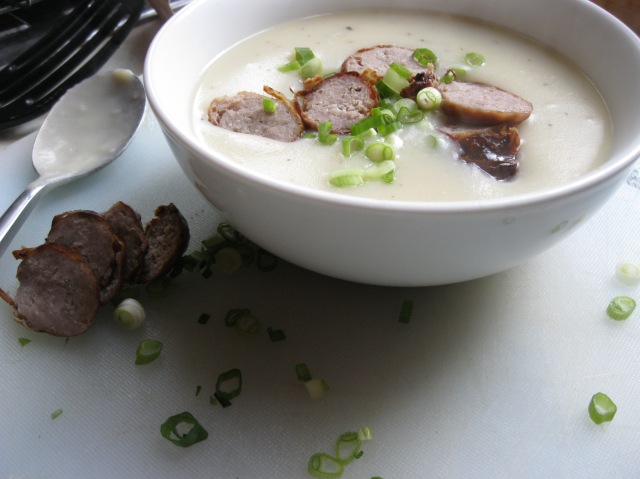 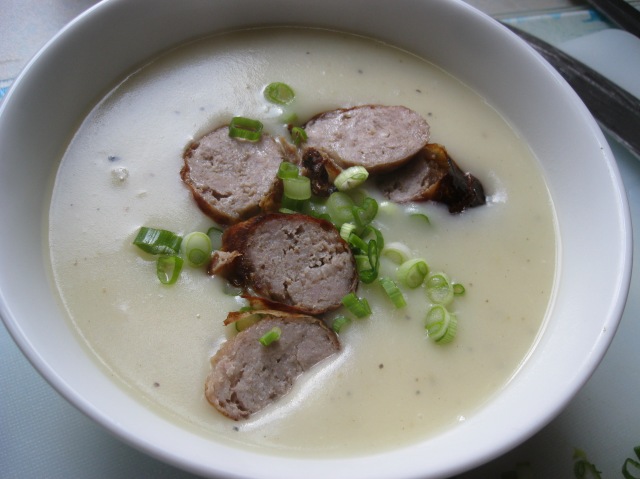 After years of being based in Glasgow, I've recently made a home for myself in Turin, Italy, for the time being, at least. This blog is my captain's log. Here I note down what I did, and what I ate. A story, then a recipe. That's how this here works. Updates on Wednesdays.
View all posts by La dittatrice →
This entry was posted in Food, Travel and tagged cheap eats, cheap food, cooking on a budget, Irish, potatoes, soup, store-cupboard recipes, storecupboard recipe. Bookmark the permalink.