You know how a lot of religions exploit people’s fears to get them to do stuff? How they try to make you feel guilty about things so that you’ll feel bad about yourself and come to church and give away all your money? Well guess what. I feel similarly guilty, about just about anything. And I’m not even religious in any way, so I should really be exempt from this most useless of emotions. And yet I am not. I have a really bad case of Catholic guilt, yet without the fear of going to hell to account for it.

It seems that my brain is absolutely determined to feel guilty about something or other, because half the time the things I feel guilty about are of no relevance at all. For example, my brain will talk me into a guilt-trip about spending too much money on a night out. And if, on inspection of my funds, it turns out I’ve not even spent that much money, instead of dropping the subject, I’ll just start to feel bad about sleeping too long after said night out. If I spent little money and woke up early as well, my brain will go in search of something else and usually it’ll find something soon enough.

So when I’m trying to come up with something nice to put on the blog, I reject half my ideas because they seem too easy, too boring or too simple, and I feel guilty about being so boring and lazy. And when I do post something quite simple, I get all on my own case for posting a recipe that anyone could’ve come up with. But that’s silly for more than one reason. First of all, I get the most positive reactions to the simpler recipes. A lot of people I know hate cooking and they never come up with recipes at all, so I can do it for them. Secondly, there’s no deity in blog heaven that will one day demand I explain my deplorable laziness in recipe blogging. And lastly, it’s my blog, I can do what I want! And so I will.

Today I’m posting something super simple that I sometimes make when I’m a bit low on time and/or cash. Potato, courgette and feta fry-up. To help out those who hate cooking, and to try and get over my atheist Catholic guilt. Maybe. 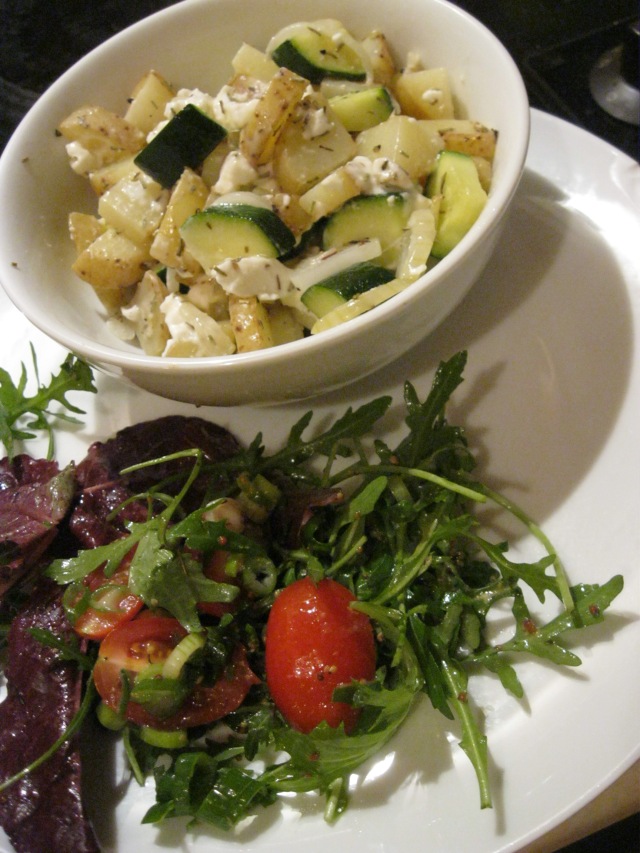 Wash the potatoes but leave the skin on. Cut out any weird bits, then chop them all up into small bits. Chuck them in a frying pan with some olive oil and fry on medium heat for a while. Add the rosemary.

Chop up the courgette and slice rings out of the onion. Once the potatoes are getting near edibility and are going nice and softish, add the vegetables. Once those are done, add the feta. Take the pan off the heat, stir well so that everything’s mixed properly, then serve straight away with a bunch of salad. 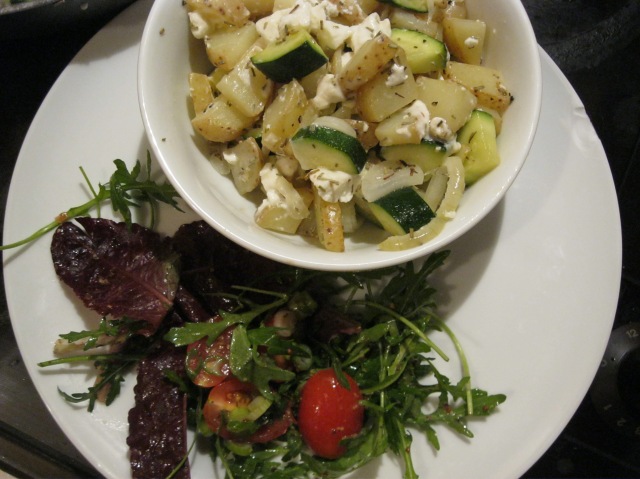