After last week’s Italian classic, pizza, I thought it might be nice to do another one in the same category: lasagne al forno! 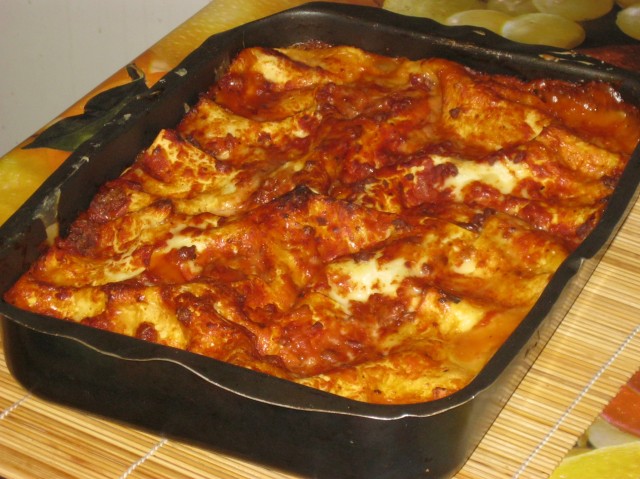 Piping hot, just out of the oven, lasagne al ragù.

Now, I feel that I haven’t been enough of a dictator over the last year to merit my blog’s name. I’ve been way too friendly, letting people have opinions and allowing people to add cream to their carbonara. It’s time for some rigidity. So here: stop calling it lasagna. It’s lasagne, with a final E. It’s actually the pasta, the rectangular sheets, that are called lasagne. One lasagna, two lasagne. Since the dish is made with more than one sheet, or lasagna, you use the plural to indicate the dish, so lasagne. Al forno just means ‘from the oven’, which they are.

This particular type of lasagne that I’ve got in mind just now are the lasagne that most people know and like, lasagne al ragù, or alla bolognese. They’re called that because they’re served with the same sauce (or ragù) that is typically Bolognese, or from the city of Bologna, about which I wrote a few months ago. However, because the pasta effectively needs to be cooked by the sauce, it needs to be a bit more liquid than I’d usually make it so the recipe below is slightly different.

The bad news about lasagne is that it’s quite a lot of work to make. The good news is that it’s a dish fit for gods, and you can make three times the quantity you think you want to eat and then have it three nights in a row, because you won’t get tired of it! Huzzah.

To feed 6, or to feed two for three days, you will need:

for the béchamel sauce:

– about 100 gr butter
– enough flour, probably about 100 gr
– a litre of milk, room temperature or slightly warmed up in the microwave
– nutmeg and salt

Start by making the ragù or meat sauce. Finely chop all the veg, fry in some olive oil in a large frying pan, with a little bit of water. Once the water evaporates and the veg goes softish, add the mince. Wait until it’s all browned, then add the wine. Leave to simmer, no lid, until the wine evaporates. Add the herbs and the passata, enough to make a liquidish sauce, but not so much as to drown all of the meat. Leave to simmer for a while and add a little bit of stock if it seems to turn too dry.

Boil a pan of water with some salt in it. Take your lasagna sheets and boil each for a short amount of time, about a minute and a half. This way the pasta will be a bit more flexible and easier to fold into your oven dish, but it won’t turn out overcooked. Also, if your dish is of a very inconvenient size, this way you can cut the sheets a bit and avoid too much overlap of pasta.

To make the béchamel, melt the butter in a saucepan and add the butter. Stir until it becomes a smooth concoction. Then add the milk, a little at the time, and keep stirring, so that you get a thick sauce. Once it’s thickened, add a generous pinch of salt and a normal pinch of nutmeg.

Now it’s time to build the dish. Sprinkle some olive oil into your dish, then pour in the first layer of ragù.

On top of this, put the first layer of pasta. Top with béchamel, then add a layer of ragù, and some grated parmesan cheese. Then top with pasta, béchamel again, and repeat this process, making sure that you have at least four layers of pasta.

Finish with ragù and

parmesan, and make sure you keep enough ragù for the last layer, which needs to be the most abundant of them all. Top generously with parmesan cheese.

Put the lasagne in the oven for 45 minutes to one hour, 160°C. When you take it out, leave it to stand for about 15 minutes before serving. It won’t cool down noticeably that quickly, but it’ll settle and it’ll be much easier to serve without having it fall apart as you lift it from the dish. 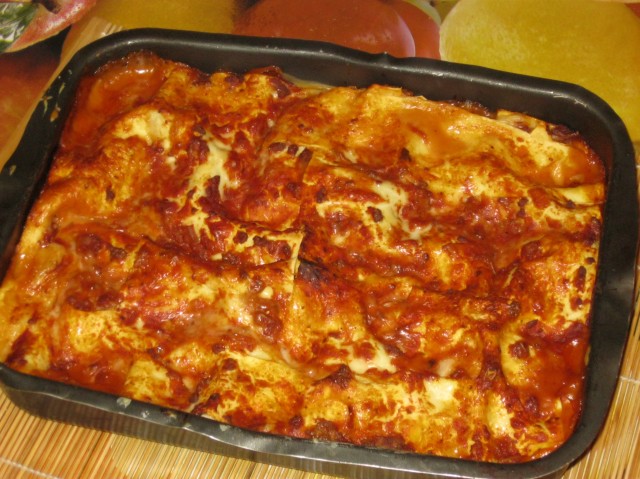 After years of being based in Glasgow, I've recently made a home for myself in Turin, Italy, for the time being, at least. This blog is my captain's log. Here I note down what I did, and what I ate. A story, then a recipe. That's how this here works. Updates on Wednesdays.
View all posts by La dittatrice →
This entry was posted in Food, Italian. Bookmark the permalink.