Of walnuts and woe

Yes, and I am very sorry. No more unannounced disappearances, I promise. But it was for a purpose. I spent the time I didn’t spend on WordPress in Hungary, searching for new recipes, looking at lakes in caves and generally pissing about! Hungary is a lovely place with cool people, awesome booze and lovely food such as gulyas, and pörkölt, which is actually more like that which we call goulash than gulyas, but more about that next week. This week: Palacsinta!

Palacsinta (pronounced PA-la-cheen-tah), a type of crêpe that exists in both sweet and savoury versions, was one of the dishes I was looking forward to the most, in particular the gundel palacsinta, filled with walnuts and chocolate. When my sister and I were in Budapest, we discovered that this gundel palacsinta was named after the place where it was invented: a flippin fancy, posh-ass restaurant. Our hostess in Budapest warned us: “Oohh yeaaahhh Gundel… It’s extremely pricey.” We decided to give it a go, anyway. This was the birthplace of the one and only Gundel palacsinta, nowhere else was it going to be better than here.

As we arrived, we witnessed an impeccably dressed member of staff accompanying a lady to her car, opening her car door for her, closing it so discreetly that it didn’t make even a little sound, and then briskly stepping onto the street to stop any car that might impede her immediate departure. Promising.

That's car-doorguy, on the right.

My sister and I looked at each other, at my army boots, at her flip-flops, and back at car-doorguy, who was now standing next to the entrance, looking right important and taking his job very seriously. Slightly nervous about possibly being rejected at the door, we went in.

Car-doorguy smiled friendly and asked us “whether the ladies desired to have lunch, or were thinking of something rather smaller?”. What?! “Well, we were really just <nervous cough> hoping to have some palacsinta… if we can… please…?”, we begged, too softly. “Certainly, walk right this way please”, car-doorguy said.

Not so busy, but only because it was around 5 pm, a ridiculous time to eat. The Japanese family was probably jetlagged, monocle guy was only drinking, and we, well, we don't know anything about these things, do we?

We were lead into the serene courtyard behind the restaurant, where we spotted all of the other guests: one Japanese family with their own driver, and a guy with a monocle. A monocle! I had never even seen a monocle in real life before this day, much less spent time in the same restaurant with one. Promising. An equally impeccably clad waiter showed up at our table, and spoke the legendary words “Good afternoon, how are you?”. Too flabbergasted to answer him in a normal manner we blurted out: “Radiant sir, radiant.”, which got us a nice smile, and a menu. I got a gundel palacsinta, my sister got a hazelnut paste one. Needless to say, they were presented as pieces of art, and they were really, really tasty. In the end, extremely pricey turned out to be extremely pricey Hungarian standards, and we ended up paying under a tenner each, including drinks and tips. Dear God, I love Hungary.

The recipe, unfortunately, is immensely complicated (so we didn’t pay triple what we would anywhere else just for guys to close our car doors, eh!), but let’s just pretend that we don’t know that and make it easier for ourselves. Those of you who have never had the real thing won’t taste the difference, and for those of you who have: this lazy-ass Dutch/Scots/Italian version is pretty good too. We’ll even give it another name, so as not to offend anyone with my amateurism. We’ll call it diós palacsinta, which could mean walnut pancake in Hungarian, but probably doesn’t mean anything. 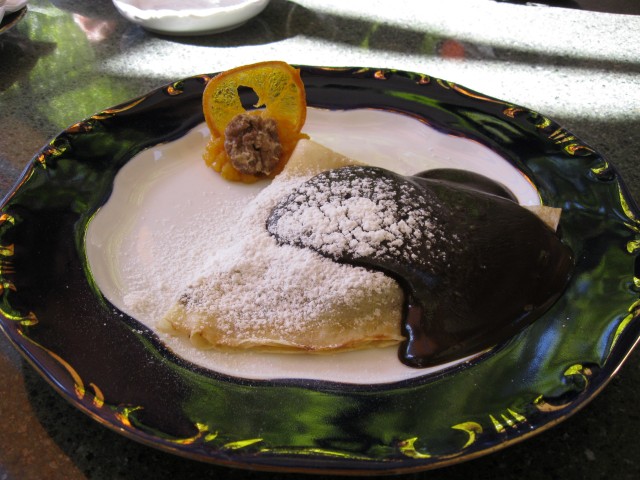 I just hope no Hungarian person ever reads this. They’ll probably have me killed and stewed in a Vérlös pörkölt for destroying the grandeur of their awesome cuisine.

For the palacsinta:
– 200g flour
– 2 eggs
– 5 dl milk
– a pinch of salt
– a couple of tbsp oil
– splash of soda water (or can we just use normal fizzy water, if we don’t have a proper soda water spraying bottle? Sure we can!)

Soak the raisins in some warm water, then chuck all of the ingredients for the filling in a food processor and grind it all up to a nice and fine filling, but not a mash. Chuck in some rum if you fancy. (Like I said previously, a dessert is not a dessert if there’s no booze in it. I think real Hungarian Gundel chefs put the booze in the sauce, but they also put egg yolks in and that’s hassle.)

Make the batter like you would normally for pancakes, add the sodawater at the last minute, then fry the palacsinta in some oil or butter.

Heat the cream au bain marie (kitchen noobs: put some water in a pan, heat it, then put a bowl over it and put the cream in this bowl). Break the chocolate into wee chunks and melt them in the cream.

To serve, put some filling on the palacsinta and fold in quarters. Top with chocolate sauce and some confectioner’s sugar.

After years of being based in Glasgow, I've recently made a home for myself in Turin, Italy, for the time being, at least. This blog is my captain's log. Here I note down what I did, and what I ate. A story, then a recipe. That's how this here works. Updates on Wednesdays.
View all posts by La dittatrice →
This entry was posted in Food, Sweets and desserts, Travel, Vegetarian. Bookmark the permalink.

1 Response to Of walnuts and woe